Kazuma seems to have a very nice, polite, and respectful personality. He is also in love with Ema, but whether or not he tells her depends on the route. If he confesses to her, he is shown to be respectful and considerate of her feelings, and will try and help her when she's feeling down.

Kazuma is also in love with Ema, but whether or not he tells her depends on the route in the game. He treasures the school photo he has with her in it, and is always polite to her. However, in spite on his own feelings, he is not forceful with Ema, and is perfectly fine with it if she chooses someone else, as long as she's happy. He is respectful and considerate of her feelings, and will do whatever he can to pick her back up if she's feeling down. He also proves to be a bit protective of her, not tolerating anyone who hurts her or makes her sad.

A screenshot of Kazuma in the game.

A screenshot of Kazuma in the game - summer uniform.

A screenshot of Kazuma with Ema and Mahoko in the anime. 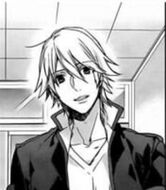 Kazuma as he appears in the manga.
Add a photo to this gallery
Retrieved from "https://brothersconflict.fandom.com/wiki/Sasakura_Kazuma?oldid=20386"
Community content is available under CC-BY-SA unless otherwise noted.