Mahoko has unruly light brown hair cut into a bob, with her bangs pushed back over her head. In addition, her eyes are brown.

Going to the same school as her, Mahoko wears a uniform similar to Ema's. Her sweater is more snug, however, hugging her curves, and under it she wears a black vest lined in white along the neckline.

Her summer uniform changes from the usual pink to soft blue, the sleeves being shorter, and the cuffs and cape are a light grey.

An optimistic girl, Mahoko has always been one to support Ema. However, she does tend to be pushy.

In episode seven, when their class had to pitch ideas for their final culture festival, Mahoko was the one to suggest executing a butler-styled café. Out of all 36 classmates, the butler theme had won by 25, mostly due to the female peers. Addressing Yuusuke as "Asahina Fuuto's brother", Mahoko declared that since her idea was elected, he would have to participate as one of the butlers.

On the day of the culture festival, it was revealed that the theme was slightly altered - now it was a butler and maid café. Ema was supposed to dress for the role, but she was not able to be contacted about it beforehand, due to it being a last-minute change, so Mahoko apologized as she handed over the maid attire.

Ema and Mahoko are best friends and classmates. Throughout the game Mahoko is always supporting Ema. Ema often calls her "Maho-chan". 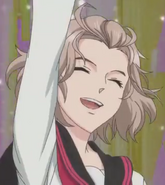 Add a photo to this gallery
Retrieved from "https://brothersconflict.fandom.com/wiki/Imai_Mahoko?oldid=19810"
Community content is available under CC-BY-SA unless otherwise noted.