Chiaki  (千秋) is a member of the Buddha Club. He is called "Chi-chan" by Kaname.

Chiaki has gray hair and light blue eyes. Just like Kaname, he wears a ceremonial Japanese robe, his signature color being violet, and earrings on his right ear.

Like Kaname, he is charming and kind towards potential customers, which is shown when he first meets Ema, whom he greets with flattery. In the second season's first volume of the light novel, Ema was taken to see him at a party. He reveals his true personality, shown to be arrogant controlling when he attempts to publicly rape Ema. His dislike towards Kaname and Yuusuke is apparent when they come to rescue her, in which he retorts that they are "perverted brothers".

He is a monk with Kaname. They seems to be on friendly terms.

They work in the same place. They get along well with each other. 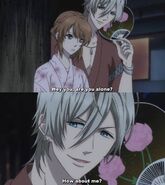 Add a photo to this gallery

Retrieved from "https://brothersconflict.fandom.com/wiki/Chiaki?oldid=20025"
Community content is available under CC-BY-SA unless otherwise noted.